Dumping the water from the Fukushima Daiichi nuclear reactor

Recently, Japan announced it would dump the water from the Fukushima Daiichi reactor in to the ocean, to the great dismay of many people. I've seen headlines that talk about damaged DNA, wildlife, and many other things. But how bad will it really be? 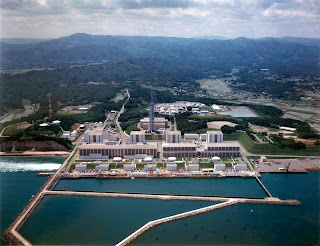 Let's give a brief history of Fukushima's nuclear reactor. In 2011 an earthquake followed by a 1000 year tidal wave knocked out all power to the Fukushima Daiichi reactor. With no cooling coming from either the grid or its own power, amd the generators were swamped, the reactor melted down. It is worth noting that this reactor had containment for the core in the event of a melt down, and that containment has never been breached. For many nuclear reactors, if the reactor is not properly cooled, it will melt, the heat can't be easily turned on and off. After access was restored, water has been continually pumped in to the reactor chamber to keep it from melting down any further. This water is then pumped out, filtered, and stored.

This water contains tritated water, water with Tritium, an isotope of hydrogen with 2 neutrons instead of the normal 0. The filtration system is able to filter out every other radioactive particle, but as tritated water is actually water, it is very difficult to separate. To separate it would require some kind of a centrifuge. The water has thus been stored until such time that a long term plan has been created to manage. 1000 tanks are either planned or have been built to store this water.

The question remains, how dangerous is this water actually? Will dumping it in to the ocean have any measurable effect? Tritated water is actually already in all sources of water that we have. It is created by cosmic ray interactions with the atmosphere, as well as with nuclear reactions on Earth. It has a half life of 12.5 years, meaning if you store a bottle of tritated water, in 12.5 years half of it will have changed to another chemical, mostly helium-3. In the process of this, a beta particle, or energetic electron, is produce. It turns out that this a very low energy particle. Skin can easily block it. While there is much water in the human body, it remains in the body for between one to two weeks. If you were to swim in tritated water, you should be fine. Swallowing it would be problematic, but that would disappear quite quickly.

Given that all water contains some tritated water, there are standards for how much tritium is allowed in drinking water. Wikipedia states that Japan's limits are 600,000 becquerels (Bq) /liter. It is worth noting that some countries have limits as low as 100 Bq/ liter. How radioactive then is the water stored near the reactor at Fukushima? In 2016 there was a total of 760 TBq (equivalent to 2.1 g of tritium or 14 mL of tritiated water) in a total of 860,000 m of stored water. If you do the math, that comes to on average 883,720 Bq/liter. In other words, this water is almost legal drinking water in Japan, in a mere 7 years from then, or 2023, that water on average would be legal drinking water in Japan! Granted the older water has much higher levels, about 5x the Japanese limits, but still, the levels of radioactivity are quite low.

So what is the plan then? Well, they want to dillute it and dump it in to the ocean slowly, over the course of a year. The average amount of tritium is around 1 Bq/ liter throughout the world. If the water is then dilluted in to a body of water a million times more volume than it is currently in, that will not quite double the amount of tritated water in there. For comparison, that is roughly the volume of Lake Titicaca, the 15th largest lake in the world. While no doubt it can be measured, practically speaking it will make no significant difference.

The bottom line is, this really isn't a problem. Storing it is a huge challenge, and releasing it in to the ocean won't make a diference. Let's go ahead and release the water, saving Japan from having to build 2 tanks/ day to store this water.